What is a clone? Why do we care? Which ones do we have at Terragena? Why? 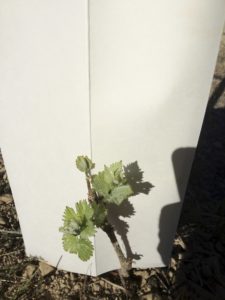 young grapevine and its cardboard protector

What is a clone?

A clone is a cutting from a mother vine of a plant, and it is genetically identical to the mother plant. Sometimes the mother plant, or even just part of the plant, has a mutation in one or more genes, commonly referred to as a bud sport mutation. Sometimes these mutations are beneficial, and often they are benign or even deleterious. These mutations can from time to time lead to slight variations in vines.

Pinot Noir has been propagated for a very long time, and has been surmised to be very closely related to the wild Vitis Sylvestris. Being around for such a long time and having a relatively “wild” parentage has led to a lot of opportunities for mutation. Traditionally when a vineyard was replanted, or a new vineyard established, the strongest vines would be used to make cuttings for the new planting. This meant that over time the best selections of these mutations were planted in traditional regions such as Burgundy. More recently these mutations, particularly the beneficial ones, have been collected and have become categorized in various systems.

Some of the more common clones have picked up colloquial names along the way based on their origins or characteristics. In the United States, grapes are imported and registered via the grapevine registry which treats them for known viruses (yes, grape vines can get viruses) and then assigns them a number post-treatment. These vines may already have other names or numbers from the location of origin; however, to maintain a uniform catalog, FPS uses their system for identifying vines they have treated. For example Dijon clone 115 is cataloged as FPS 73.

This is all to say, a clone is a sport mutation, genetically identical to the parent vine except for one or two gene differences. Imagine this process going on for hundred or thousands of years, and you can imagine how we now have numerous clones today (search the registry for Pinot Noir to get an idea of how many).

Why do we care?

Maybe you don’t, and if so you should stop reading NOW. If you’re still here, we will take a journey down the decision making process, the sleepless nights, and the general indecisive decisiveness of planting a small vineyard in a unique, viticulturally unexplored location. That’s what we did at Terragena, and this is our story.

115, 02A Wadenswil, Pommard, are commonly referred to as workhorse clones; they provide reliable yields and good quality. These clones are used commonly in both California and Oregon. Many vineyards only plant one or two of these clones and produce very fine wines. However, at Terragena we believe diversity generates creativity. 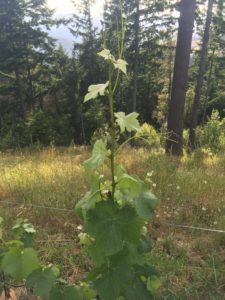 Which ones do we have at Terragena? Why?

If you’re still reading this, I imagine you probably realize by now we are a little bit more… (eccentric, obsessive, experimental, adventurous, etc.) than many other vineyards. We planted 12 own-rooted clones in our southern vineyard block and grafted an additional 5 different clones onto rootstocks in the northern block. That means in about a two-acre area we planted 17 different clones of Pinot Noir. Why? Nothing ventured, nothing gained! We planted the common workhorse clones along with a variety of heritage and “suitcase” clones (clones likely originally imported to the US through back channels, such as in someone’s suitcase). Clones typically express (grow, produce grapes) differently in different locations, so how do you determine how a given clone will express in a given place? You plant it! We embraced the opportunity to experiment and get an idea for what clones might perform the best on our particular site, using our vineyard as a winemaker’s playground from which to blend up unique and interesting wines. Since it takes 3-5 years for yields of quality fruit after planting, and an additional 5 or so years for the vineyard to fully mature, this project is a long-term experiment and one about which we are very excited to taste the results.

Pommard (4, 5, 91) is one of the oldest clones in the United States and was imported in the 1950s via the University of California, Davis by Dr. Harold Olmo. It is a workhorse clone and produces wines of various types depending on location.

VCR 18 (68) is an Italian clone of Pinot Noir also known as Pinot Nero. It rated highly in trials for wines for aging and viticultural characteristics and yield.

Swan Clone (97) is a likely “suitcase” clone which came from Joseph Swan and Martin Ray sources. It was rated highly and donated to FPS by Francis Mahoney along with four other clones.

Gamay Beaujolais Clone (22) is known for its upright growth habit and vigor. Upright growth clones are somewhat easier to manage in the vineyard as they naturally grow into the trellis wires as opposed to flopping about all over the place, which requires hand tucking.

Precoce (150) was originally imported into Canada, and it is known for early ripening, as much as 2 weeks prior to other clones of Pinot Noir. It purportedly originates from Germany.

Jackson clone (29/102) was collected from an abandoned vineyard near Jackson, California. It was not originally released by FPS due to concerns about varietal identification. It was included in tests in Oregon and consistently rated highly in overall wine quality. It has since been released as FPS 106 after subsequent heat treatment. The source for our vineyard is from the original 29 in Oregon by way of a nursery in Washington state.

Wadenswil (02A) was imported in 1952 from Wadenswil, Switzerland, purportedly from materials brought back by Swiss mercenaries who fought throughout France. 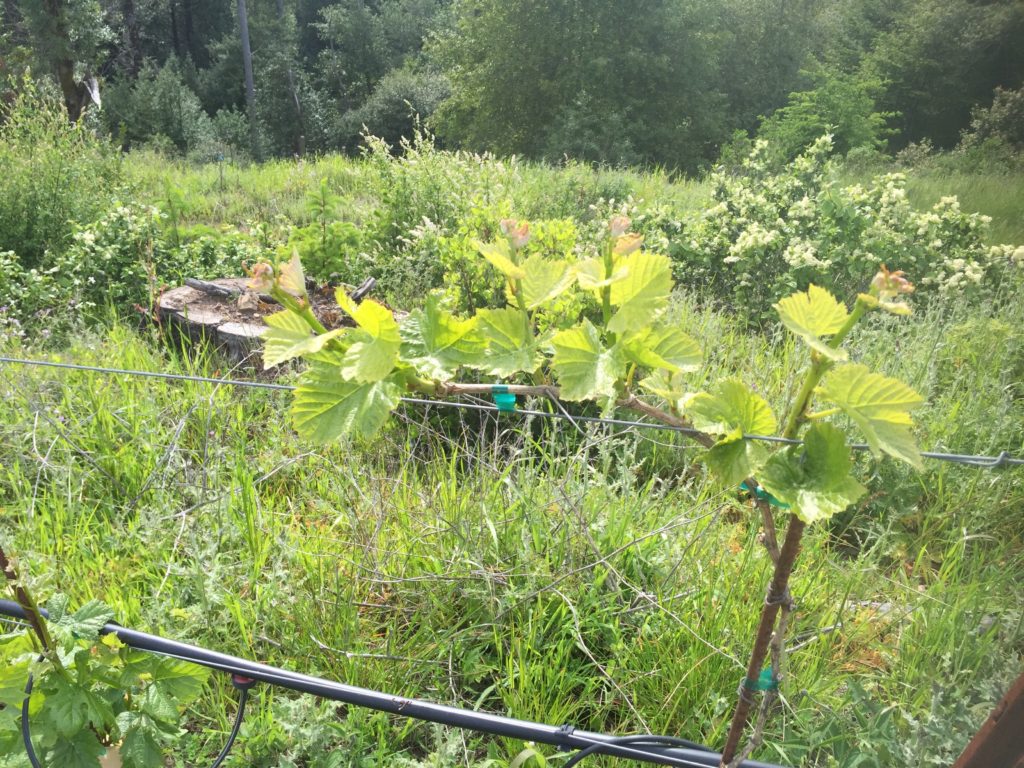 Calera (96) is purportedly originally from a vineyard in Chambertin, France, a well known growing region for Pinot Noir in Burgundy.

Trefethen (102), for which the original French source is unknown, is almost certainly a suitcase clone. It came to FPS via the Trefethen vineyard in the Carneros region of California.

Vosne Romanee (122) is a clone purportedly from a Grand Cru AOC in Vosne Romanee. It campe to FPS via Clos Pepe in Lompoc, California. The original vine material was retrieved from the Grand Cru vineyard after pruning had left it discarded in a vineyard row.

828* is another clone from the Dijon series. It took a very long time to release due to virus issues. It was later “imported” in a suitcase and planted in Oregon. Subsequently it has become quite clear that this suitcase clone is very different from the official 828 clone, as it has widely different growth characteristics. A very good article on this clone and general history of clonal importation is available at the Prince of Pinot. Since this clone did not go through FPS, it does not have an FPS number, although we extensively virus tested it prior to grafting into our vineyard. 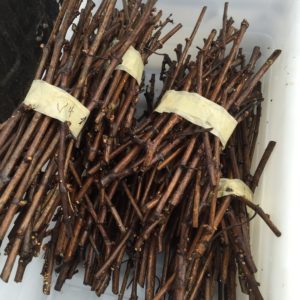 “fake” 828 budwood for grafting onto rootstock

We sourced our extensive selection of clones from either UC Davis FPS or certified virus-free nursery stock with the exception of 828* which came from an unnamed vineyard with bud material thoroughly tested for known viruses prior to grafting. 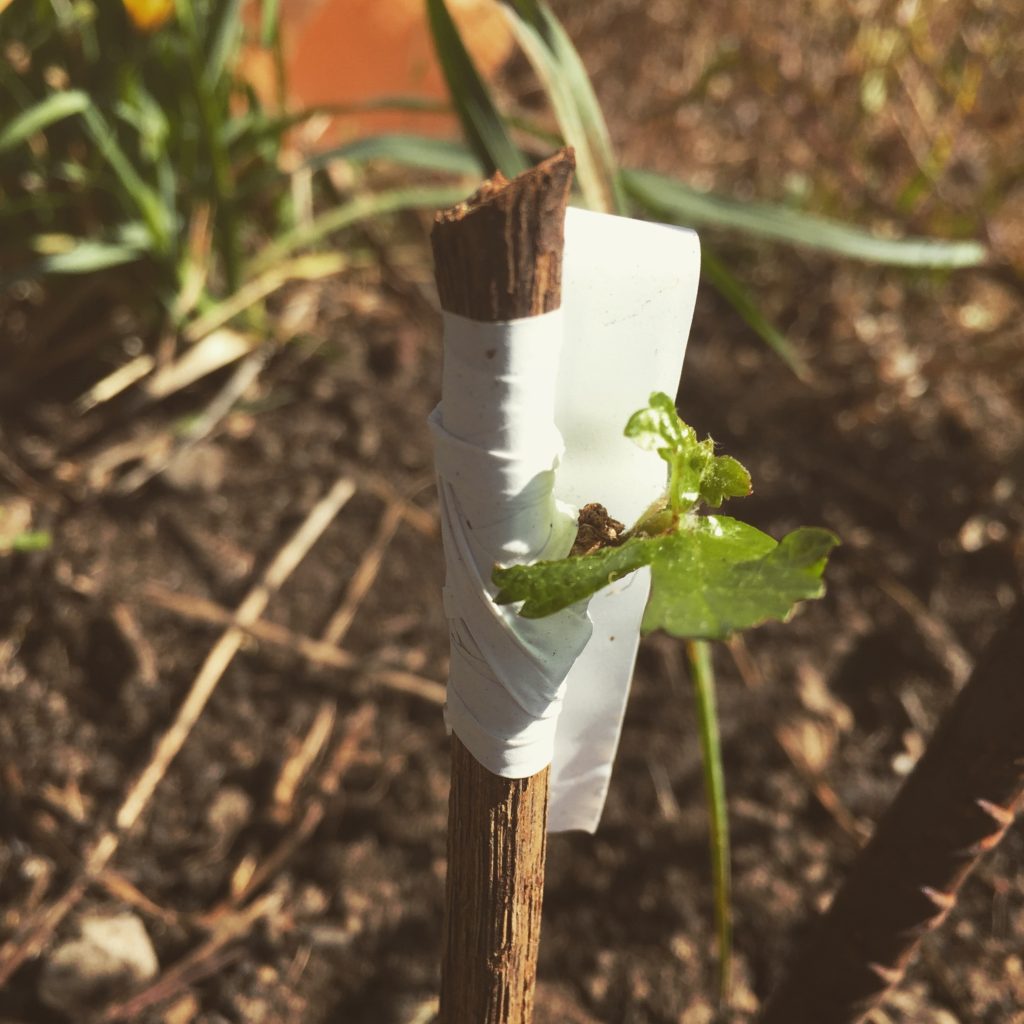 *While it is known 828, it is not the official 828. We don’t have another name to call it, other than “fake” 828. It is therefore referred to with the asterisk in order to designate that it is not the official French selection. “Fake” 828 has been known to produce powerful wines from marginal and/or extreme locations. Therefore we grafted a significant portion of the north vineyard to this variety.

The source for much of the above information about clones came from: