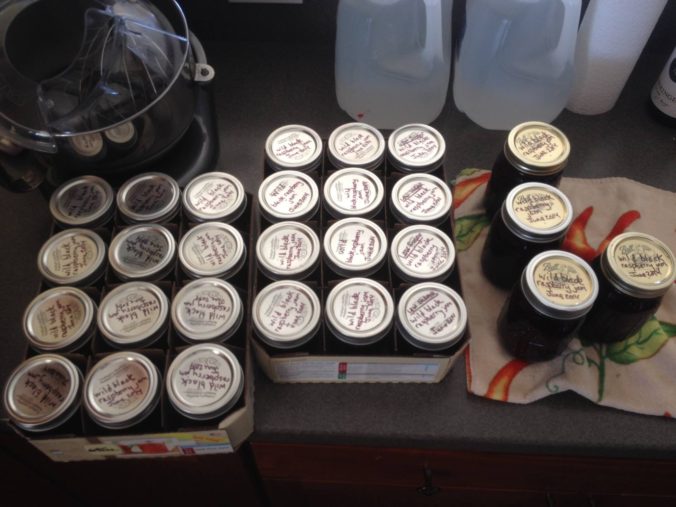 What’s up with the Terragena Jam?

If you’ve ever stayed at Terragena Vineyard through AirBnB, you’ve probably received a jar of our homemade black raspberry jam. What’s up with that?

When we first moved to this land, we set up a tent in the clearing that later became the Yurt clearing. It was July, and we noticed these small dark berries were growing wild all over the place. Chris, being the adventurous and slightly reckless soul that he is, tried them without knowing what they were and pronounced them delicious. After he didn’t die from eating the berries, we started using them for all sorts of things – fantastic campfire pancakes, yogurt toppings, and snacks straight from the bushes. 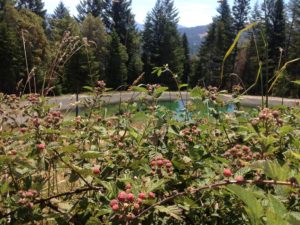 A friend from the area told us these were marionberries, so for a long time that’s what we thought they were. Years later, I decided to do some research and realized they are NOT in fact marionberries, which are a type of blackberry, but rather black raspberries. Okay, whatever. What’s in a name, right? Well, it turns out that not only are black raspberries awesomely delicious, they’re also super healthy with tons of antioxidants and have even been shown to prevent cancer (yes, seriously).  And, they grow wild all over the place at Terragena Vineyard. Thanks, nature!

Our black raspberries are in season only about six weeks out of the year – usually from the end of May through the beginning of July. To preserve these little gems, we freeze a bunch (for later use in pies, ice cream, and smoothies) and we also make large batches of jam. Raspberries don’t need much added in order to make jam – all we add is sugar, and occasionally some lemon juice if the jam needs some brightness.

This year, I picked about five gallons of berries in what I like to call “extreme berry-picking” style (balancing precariously on large logs or steep hillsides). Not exactly an extreme sport, but a bit more challenging than the experience you’ll have at a place where berries are farmed instead of growing wild. After picking the berries, my hands and arms always look like I’ve been attacked by a bunch of tiny kittens – scratched all over. 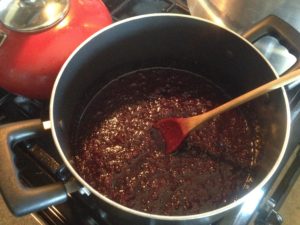 I made the jam outside using our large camp stove because it was about a billion degrees outside. To make jam, you have to boil the berries in their juices for quite a while (read: hours) to reduce the water content, and in 90-something degree weather there was no way I was going to do this inside. You also have to boil the jam jars to sanitize them both before and after filling them with jam, so there’s even more heat involved. Thus, this was an outside project. In past years, we’ve made jam inside when it’s cooler, but this year I found that being outside while cooking made me nostalgic for the days when we used to cook on our camp stove outside while camping in the yurt clearing after we first moved to this land.

If you’re lucky enough to snag a jar of this jam, I hope you feel good knowing that it was made with love and memories and wild-growing, antioxidant-packed, bursts of yumminess.

High Lifter and Our Water System