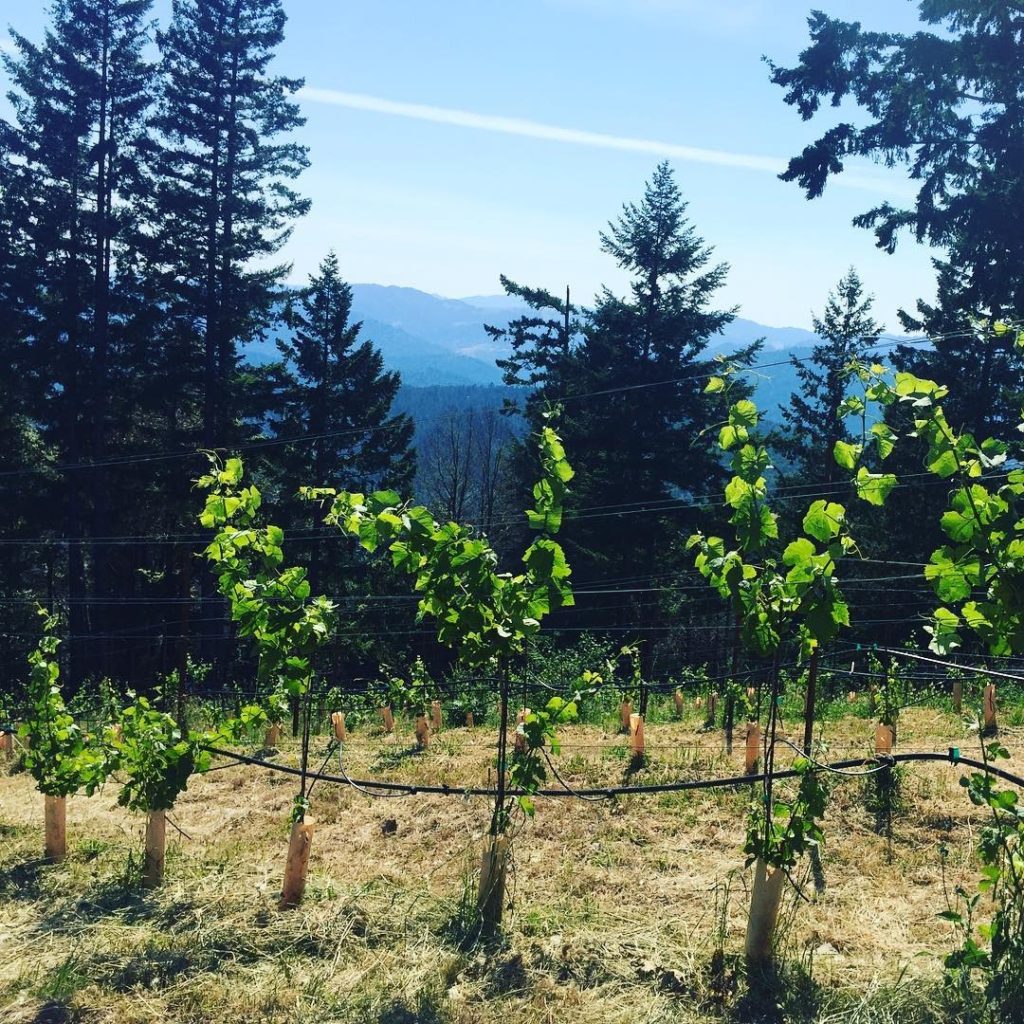 Way back in 2008 we started this adventure with a dream of planting a vineyard, and in 2013 we finally planted it. This is the story of the irrigation – or life support – system of the young vineyard. Though certain sections of our vineyard may be dry farmed in the future, the vines started out as a mere 4 inches tall and needed a little help to grow strong. So, we built an off-grid irrigation system to support the vines while they become established.

The irrigation system began in the summer of 2012 with digging a big hole – the eventual location of our rainwater-filled irrigation pond. 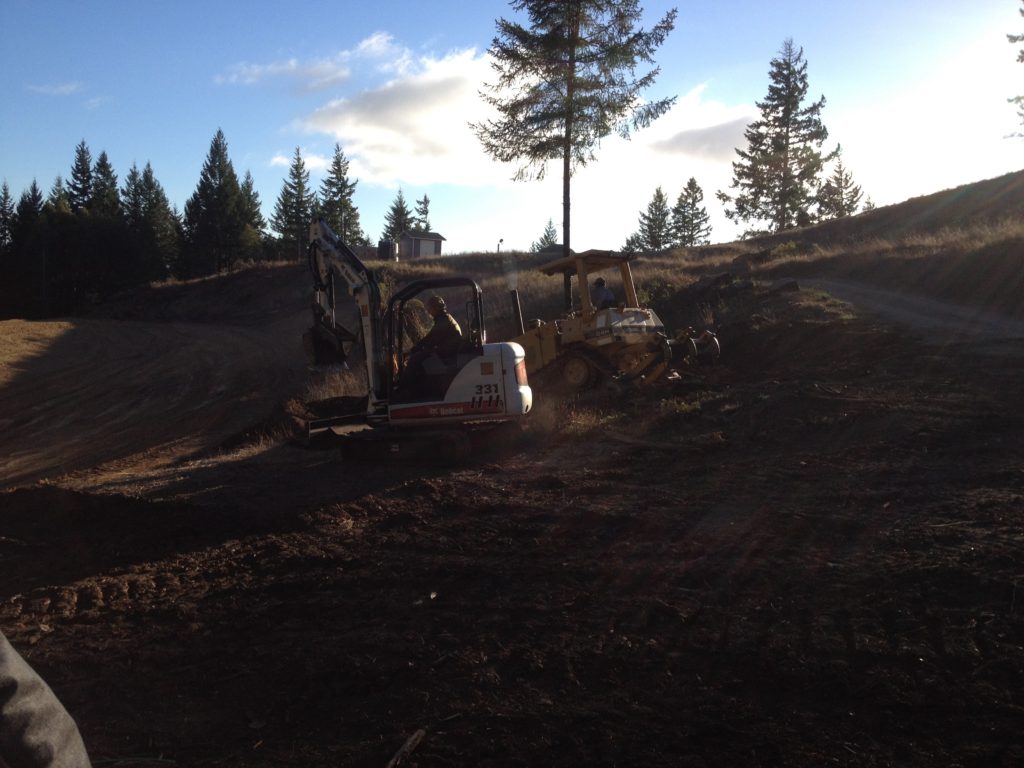 digging the pit that eventually became our irrigation pond

We then lined the pit with several layers of pond liner: an underlayment, an impermeable liner, and an over-layment to protect the liner from the sun and other damage. 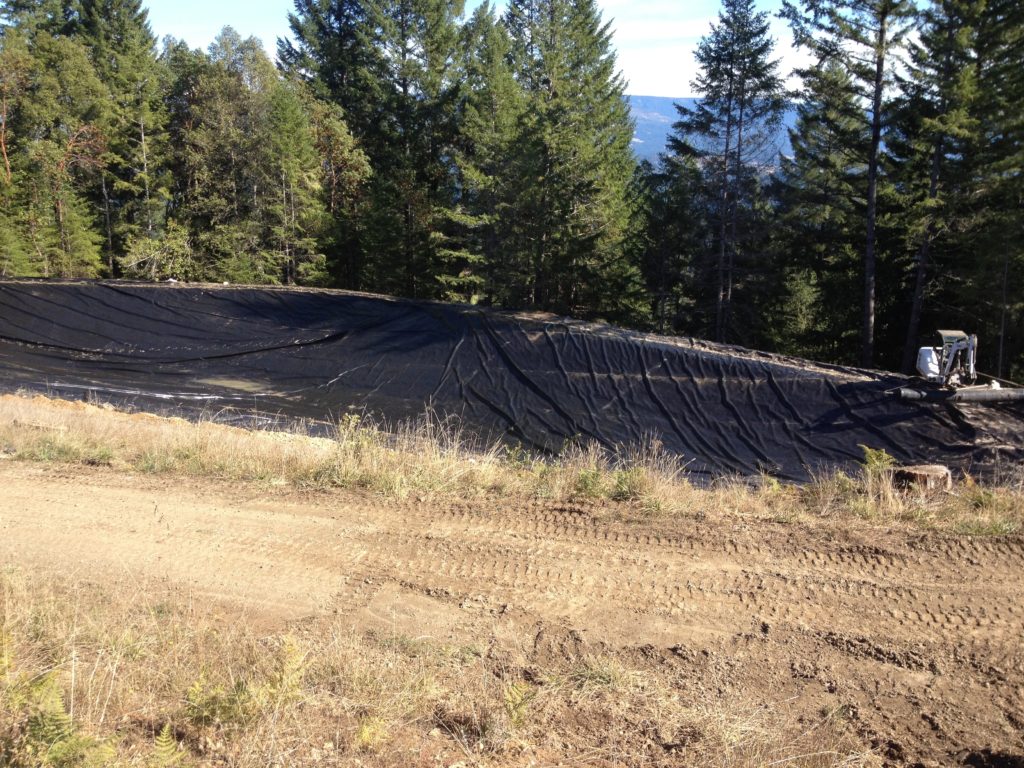 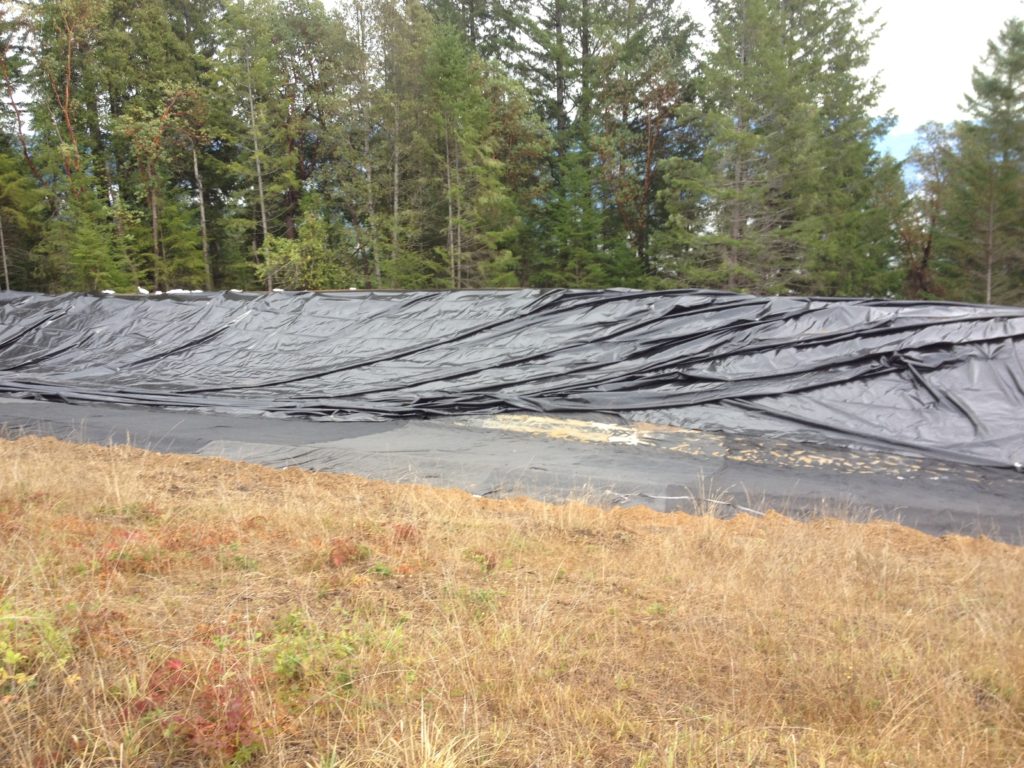 the over-layment protects the other layers from damage

It was quite a project to drag out the over 30,000 square foot liners and anchor them around the edges of the pond. It took a team to put these liners into place.

We then spread gravel around the edges for several purposes. The gravel further protects the layers of pond liners, and it also provides a nice aesthetic for people who swim in or sunbathe next to the pond. Additionally, the gravel helps with traction when walking on the bank. 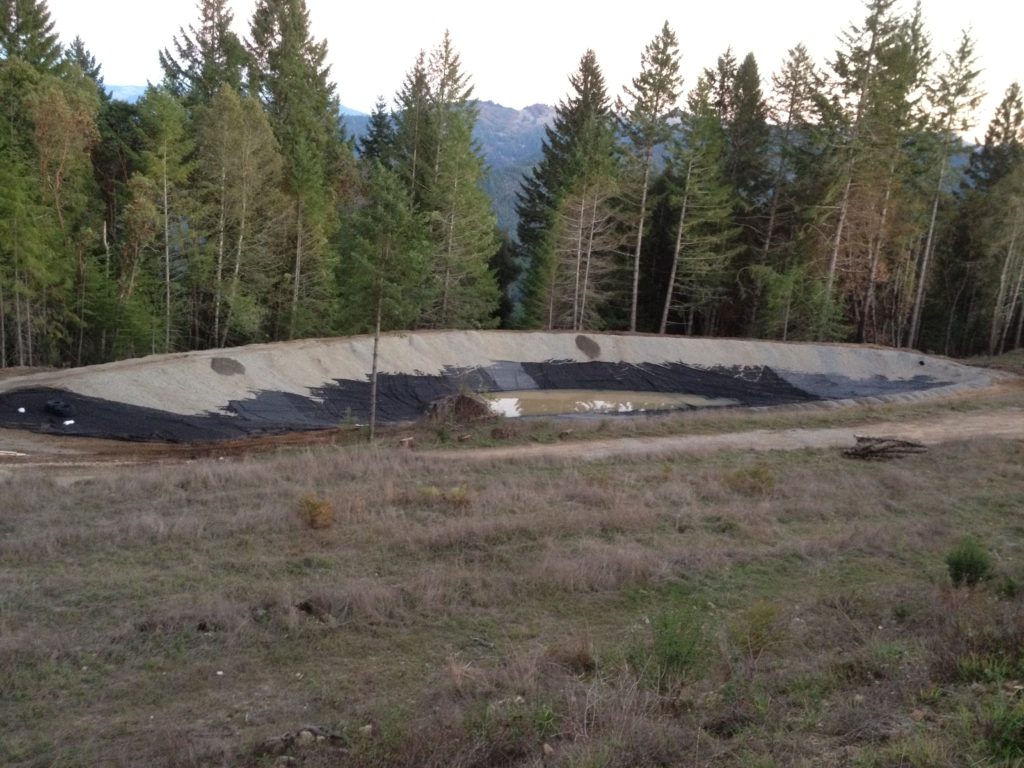 Ultimately we ended up with a pond about 14 feet deep in the center when full, and storing about 1,000,000 gallons of water. Luckily it rains a LOT in the winter, and even snows sometimes, so the pond easily fills up completely each winter. Of course, it was completely empty after we first built it during the summer of 2012, and by the next spring it was completely full – just in time for our first planting of grapevines! 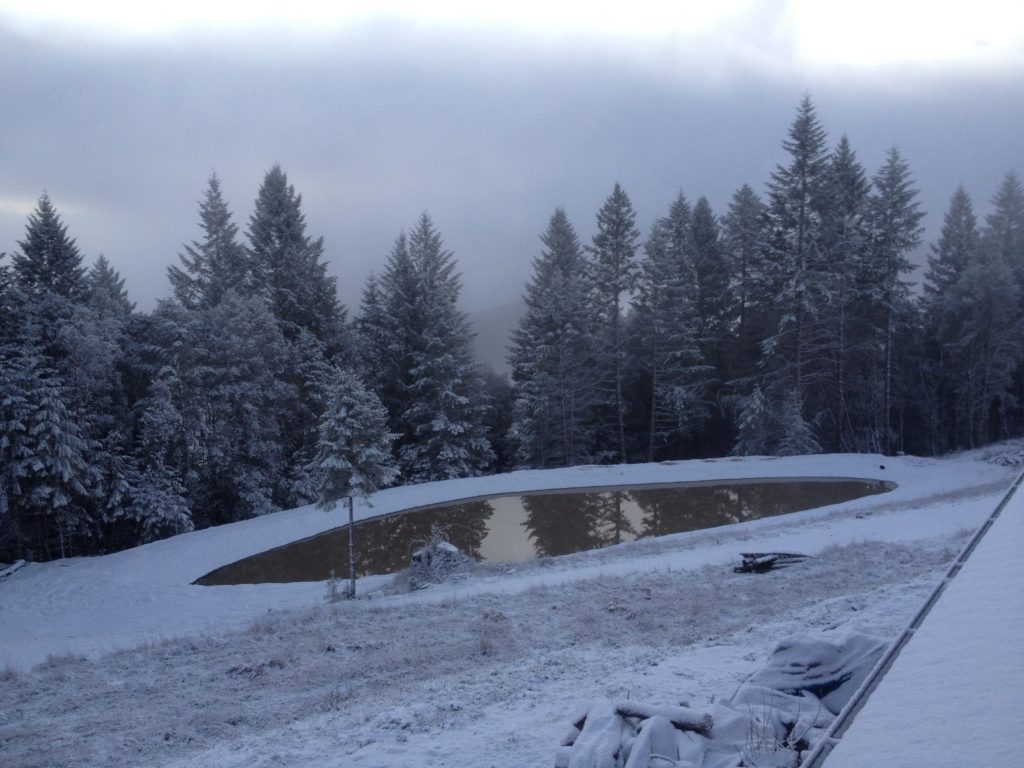 the irrigation pond in wintertime

Success! You can see the vineyard end posts in the photo below of the pond as we were just beginning the planting process. The water is now pumped via solar pump up to tanks by the house and gravity-fed down to the vineyards below. Each vineyard row has an irrigation line running down it, and each vine has an individual dripper line running to it. When the irrigation system is turned on, vines receive a slow drip of water over several hours, allowing the water to penetrate deeply into the soil, encouraging deep root growth. The video below shows our irrigation system in action.

This system has allowed the vines to take root on the shallow and rocky sandstone soils in the upper sections of the vineyards. Lower down in the vineyards, the soils progress to a sandy-clay and then into a clay-loam, which have more natural water storage capacity. We work hard to target our irrigation to the vines that need it, while limiting it on the vines with stronger soils. We believe the unique mix of clones and soils will lend complexity to the Pinot Noir produced from this vineyard. 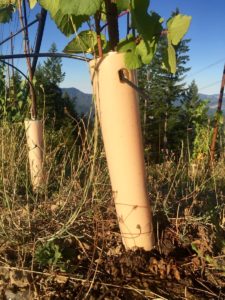 a single dripper line runs to each grapevine 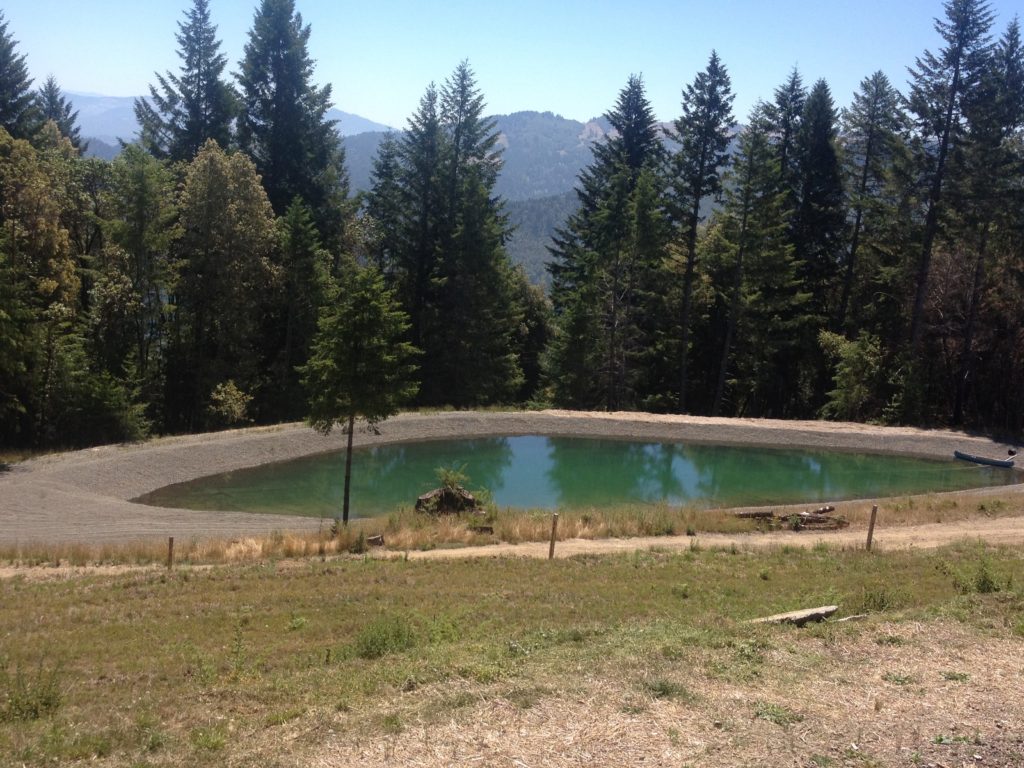 the irrigation pond, full from rainwater right before the vineyard planting first began in 2013

High Lifter and Our Water System